Shazia Ahmad. Breaking with Tradition: The Life and Death of Qandeel Baloch 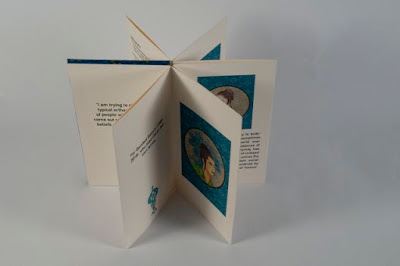 Shazia Ahmad. Breaking with Tradition: The Life and Death of Qandeel Baloch    responds to Le 6 avril 1944
In her response, Shazia Ahmad, points to “the tragic story of persecution and punishment that resonates" with her. Her artists’ book represents a contemporary tragedy involving the 2016 assassination (honor killing) of Qandeel Baloch, a Pakistani social media star. In her work, Shazia pays tribute to this courageous young woman who defied strict gender roles;  her text which tells the unfolding story of Baloch also incorporates Pakistan’s material culture traditions. In her recent work, Shazia Ahmad indicates that she has “focused on Pakistan, her birthplace, a country that has drifted further towards religious extremism and social conservatism where people are persecuted for speaking out, behaving differently or simply for existing.” More Images
Shazia Ahmad is presently in her second year of Studio Arts majoring in Painting and Drawing; she also had a BA in Art History. 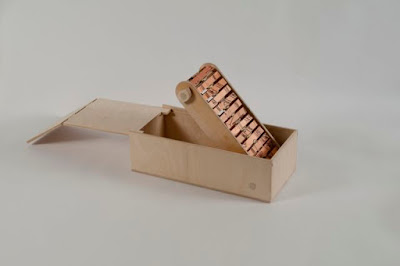 Mauricio Aristizabal. non sense information: the endless loop    responds to
Ste. Sebastienne: Hommage à Louise Bourgeois
The response to this bookwork focuses on the powerful image of the martyr St. Sebastien pierced by arrows that evokes an association with contemporary arms and projectiles or bullets for this artist. Inspired by a 3D printer model that prints itself, he explores the idea of perpetual nothingness in this work where he constructed a conveyor belt book consisting of copper plate “pages.”  His concern for using metal materials to make art rather than bullets is integral to his work. Mauricio Aristizabal writes: “As an artist, and most important, as a human being, the dream is to be able to take all the metal out of the weaponry sector. Reality is that I only need 150 grams of metal to save a human life. Metal is the message, more of this material I use, less ends as weaponry.” More Images
Mauricio Aristizabal is currently enrolled as a Sculpture and Print Media minor student at Concordia University. He studied architecture, painting and drawing as well as graphic design in Colombia. 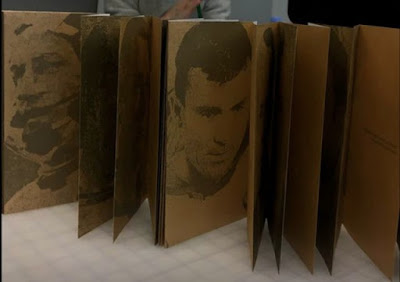 Alejandro Barbosa. Quiero ser astronauta    responds to    Reflections of a Face
The artist responds to the photographic portraits in the artists’ book Reflections of a Face which he describes as a  “compelling book [that] reflects on the gaze of the disenfranchised.” In his work, he focuses more specifically on revisited photographs of the Apollo moon landing missions demonstrating a  concern with the privilege of looking at planet Earth directly and aims to challenge the universalist tone of space-exploration discourse. He also incorporates some of his own texts. He writes “my work is concerned with possible ways of participating in the mediative circulation of information.”
Alejandro A. Barbosa will receive his Bachelor of Fine Arts in Photography from Concordia University in 2018 and will continue studies in the MFA program at UBC. 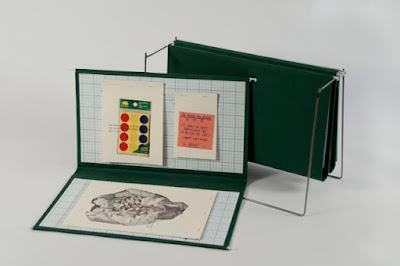 Nix Burox. Identity Materials     responds to     Travaux photographique
Aligning their work with the content and structure of Travaux photographique, Nix Burox writes: "My project responds first and foremost to the idea of a collection, divided into different tomes or folders, that each offer a different perspective on the same topic." They probe the meaning of the archive, a major focus in their art practice, and also addresses the freighted concept of identity. Underlining the idea of how archives actively create meaning, they uses the self as a test case, selecting elements from their life and playing with their re-organization of narratives. Through this act of archiving, new semi-fictional identities or alter-egos emerge. In this multi-book project, each ‘book’ or tome is a categorized alter-ego collection.    More Images
Nix Burox is in their final year of studies in Print Media in the Department of Studio Arts. 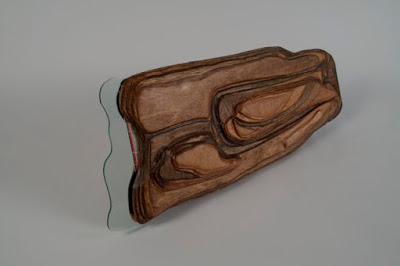 Lindsey Carter. CARGO    responds to     Le 6 avril 1944
It is the format of a bookless container as well as the tragic story inscribed on the walls of the box that the artists responds to. In her bookwork the artist obscures the function of the container which dissimulates a book which invoke the memory of enslavement. Over the past few years she has dealt with the  potential social, biological or psychic inheritance of chattel slavery  as a descendant of enslaved peoples. Deploying topographic and anatomical references to deal with – skin, wood, and weight - her work also serves as a personal catharsis. She also incorporates a web component  which simultaneously serves as a corollary and documents the work.   More Images
Prior to beginning her BFA in Design (2nd year) with a minor in Print Media (4th year), Lindsey Carter received a BA in Linguistics, Minor in biology from Duke University. 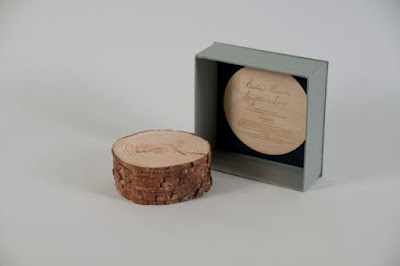 Cariston Fawcett. Broken Thread: Laughter and Tears    responds to    Hommage à Etty Hillesum
It is the unusual choice of materials including steel as well as the idea of past memories that Cariston Fawcett responds to in the book Hommage à Etty Hillesum. She is drawn to artists’ books because of the tactile relationship the viewer experiences with the physicality of a work. The materials and texts brought together in this bookwork embody fragmented memories and stories of her family who has a tree farm in Ontario. Deploying cuttings from a tree, she has laser printed a selection of ancestor’s writings discovered in the attic of her family’s home. She  insists on the importance for her to curate the found texts of family members that date in some cases from 100 years ago and underlines "the importance of utilizing “raw  materials” associated with her family."        More Images
Cariston Fawcett, in her final year of studies in the Studio Arts (Print Media minor). 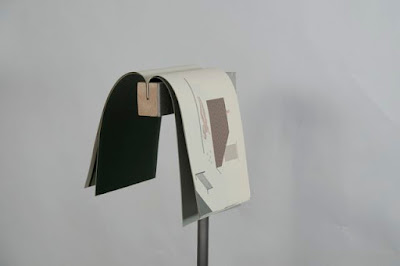 Frédéric Lamontagne. aller.stop.non.oui.peut-être   responds to    Hommage à Etty Hillesum
It is the physicality and movement embodying the book  Hommage à Etty Hillesum that led to this artist's response. Perching his book precariously on a stand, Frédéric Lamontagne highlights the awkward position of his book where he intuitively and visually presents the “playful and poetical way his relationship to conventions, institutions and structures." His intentions are to share through ambiguous narratives moments of discomfort, vulnerability and confusion experienced within failed social interactions, of rules and framing. He points to the figures presented in his book as awkward in their environment as their social interactions demonstrate a certain discomfort.   [More Images]
Frederic Lamontagne studied Arts Visuels at Cégep Sainte-Foy in Québec City before his present studies in the BFA in Print Media at Concordia. 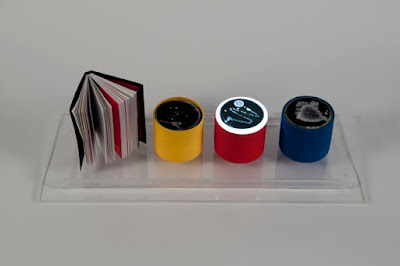 Alix Roederer-Morin. Ayoye ouch    responds to     Jaune, rouge, bleu
Responding to the aesthetics and “fine engineering” in the structure of Jaune, rouge, bleu, her bookwork grew out of recent performances entitled Bacterial Conversations. Pointing to contemporary political and social tensions and apparent individual indifference, she turns her investigations to the ways individuals can communicate associated traumas through the shared meaning of their own bacteria. Each petri dish in this work holds a specific type of trauma. She states: “My work revolves around the idea of time as an accumulation of wounds, of selves as topographies of scars and of identities as constructed around, within or in avoidance of traumas.” As an adjunct she constructed a narrative from the responses to an online questionnaire related to trauma.   [More Images]
Alix Roederer-Morin is a BFA Print Media student at Concordia University where she has explored performance art as well.

Photos taken by Isabelle Fleurelien, 2018.
Texts based on written and spoken interviews between curator Melinda Reinhart and each artist participant.